"There are three kinds of lies: lies, damn lies, and statistics." — Benjamin Disraeli

Business people and journalists have at least one thing in common. They love numbers. Their appetite for numbers constitutes the enormous demand market that keeps think tanks, research firms and other professional guessticians in business.

The "suits" have a highly legitimate need for the data that inform business decisions. Good data often mean the difference between life and death for a company. We writers have a need that is no less compelling though far less legitimate. We need to tell stories. And numbers make great story material — especially when we turn number-packed spreadsheets into those pretty pictures that are worth a thousand words. Hey, it saves us from writing. And the graphics people will tell you: readers look at pictures first. 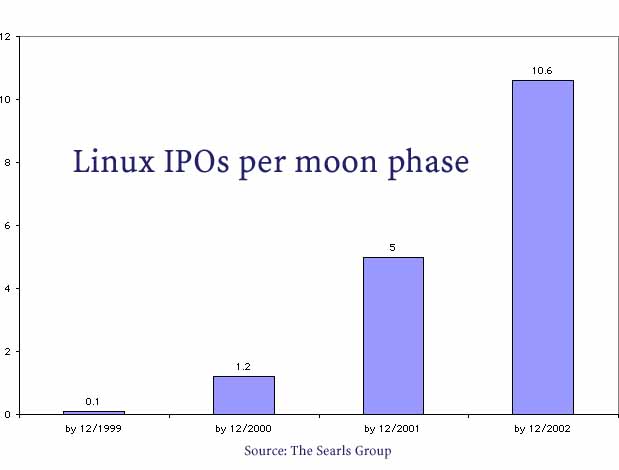 Admit it: you looked at this graphic first, didn't you? Of course.

Well, the graphic tells a lie. I made up the numbers, the spreadsheet made up the graphic, the artist made it pretty, and here we are, making a point. And it's not just that "figures lie and liars figure." It's that we rely a great deal on both. Take it from an old liar. Or, as I hate to admit that my business card once put it: a PR guy.

Let me tell you a true PR story.

The year was 1988, and I was working for a hot little networking company that figured it sold more than half the network connnectors in its market. Since that market consisted of boxes sold by one company, and sales figures for that company were easily (though not precisely) estimated, we could figure out our market penetration. Or something close to it.

But there was a hitch. Because we competed directly with that box company (and lived at their mercy) we didn't want to release our actual sales figures. But we wanted to get the story out. And we knew that our story would be a lot easier for editors to tell if our numbers were "objective," rather than our own. Since the editors went to industry research firms for their objective data, our goal was simple: we had to get those firms to OEM our numbers for us.

So we created a nice "internal" graphic that showed our best guess — 55% market penetration — and called Analyst A at the biggest research firm. Would he like to know how we were doing? Of course! So we sent him the graph. A few days later, after the firm finished digesting this 'fact,' we started referring editors to the firm. Sure enough, new graphs began to appear with stories of our success, all listing the research firm as the "source."

Were we lying? Not really. We were simply dropping our best facts into the bottom end of the data food chain, in faith that it would find its way to those at the top.

I think the problem is that techies are too honest and too literal. And most Linux companies, lets face it, are run by techies: guys like you, if we trust our own readership figures (from an "objective" source, of course).

Take the matter of host Web servers and operating systems. Netcraft has a page called "What's That Site Running?" (http://www.netcraft.com/whats/) that allows you to discover, for example, that the Microsoft Network (www.msn.net) is running "Microsoft-IIS/4.0" on "NT3 or Windows 95." That's what comes back from Netcraft's interrogation of the site host, copied out of the browser and pasted right into this text. But can we trust Netcraft, or even the information it automatically obtains? Our techies here at Linux Journal say no. In fact, one techie believes that the site might be hosted by UUNET using BSDI. There's no way to tell using Netcraft's method, because it's too easy to spoof out a wrong answer, often for legitimate security easons. Why not mislead any bad guys who might want to crack into the host? So I got exactly no help — and in fact, some discouragement — from our own technical staff.

But I still wanted that kind of data, however qualified. That's why I went ahead and put a chart together with the results of Netcraft's interrogations of the Top 50 hosts in the U.S. (See "Work still cut out" in upFRONT.) Highly qualified findings are better than no findings at all. There are some interesting findings in there (such as Hotmail, a Microsoft property, running Apache on FreeBSD). And some significant ones. Such as Linux running under only two of these fifty domains (Real Networks and Go2Net). This addresses the concerns of several parties — regular readers of Linux Journal, BSD advocates, "suits" who need unbiassed numbers, and others — that Linux Journal remain as informative and unbiassed as possible, while still advocating Linux to the world.

No problem with trying to do that. But we need the numbers. And the ones we get from the research firms will be no better than the numbers they get from Linux vendors and other involved parties.

Let's look at two of the oldest and largest research firms operating today: Gartner Group and International Data Corp. In recent months, Linux publications — both in print and on the Web — have made the most of IDC's very positive numbers, which show Linux as the fastest growing SOE, or Server Operating Environment. Many in the Linux community also bristled at Gartner's research findings, which called the OS "hype du jour" (among other unkind things) in its report, "Will Linux Be Viable Competition For Windows Desktops?" (See http://gartner12.gartnerweb.com/public/static/hotc/hc00083186.html.) A Google lookup finds over 2000 pages that mention both Gartner and Linux . Most of those, of course, flame Gartner for its cluelessness. One anonymous coward on Slashdot wrote, "The reality is, while the Gartners of the world are fudding away, Linux is already installed at all levels. Get a clue, PHBs. Now, why would anybody pay Gartner for advice?"

Simple. Because they need objective information from somebody, and they're not getting it from you. Flames are easy. Facts are hard. Like them or not, Gartner and IDG traffic in facts, or in the most educated possible guesses. If you have good hard information about how Linux is changing the business world, let them know. Or skip them and let us know. We're in the same business. That's what you — our readers — pay us for. No lie.